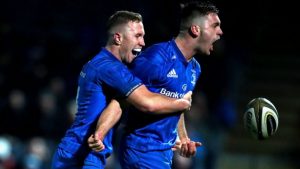 Leinster scored 21 of every an emotional closing 10 minutes to deny Connacht their first triumph at the RDS.

The guests appeared on the cusp of an exciting outcome in Dublin when they went 17 point clear following 63 minutes.

Yet, attempts via Sean Cronin and Dan Leavy pulled Leinster again into contention before Andrew Porter tunneled over profound into injury time to grab a 33-29 win.

Center Conor O’Brien and second column Mick Kearney likewise crossed for Leinster as the safeguarding champions extended their 16-point advantage at the highest point of Conference B.

Connacht, who move level on points with third-set Ospreys in Conference A, will come back to the Sportsground for their next between commonplace derby against Ulster on 28 December while Leinster travel to Limerick to confront most outstanding opponent Munster at Thomond Park the next day.

Fair play, those Leinster lads just don’t know when they are beaten. Looked dead & buried against an impressive Connacht at the RDS, but forced their way back into it and kept their nerve in a remarkable final play that must have involved close on 100 passes.

Brutal defeat for @connachtrugby
who are denied at the death by Andrew Porter, who earns @leinsterrugby a dramatic 33-29 win in 9-try thriller #RTErugby https://t.co/2tihvzufkK

There’s try number four!! This time Carty turns provider by selling a magnificent dummy to break inside the Leinster half, and then finds Bladey who touches down underneath the posts!
LEI 12 CON 26 #LEIvCON