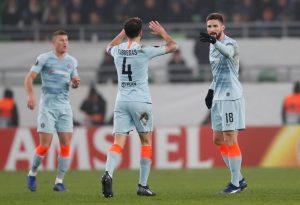 It ends 2-2 in Budapest, and the Blues remain unbeaten in the Europa League.

? Willian and Giroud with the goals from two brilliant free-kicks. #VIDIvCFC pic.twitter.com/sxiiZqKVcZ

Olivier Giroud making an absolute mockery of this defender’s decision to stand on the post for his free-kick, the big, impossibly handsome bastard. pic.twitter.com/ZMgVK6czPg

10 – Since his Chelsea debut, Willian has scored 10 direct free kicks for the Blues – more than any other player. Precision. pic.twitter.com/nl6zVJuvkP