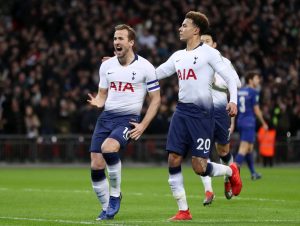 Spurs beat us 3 times In a row enough is enough and sign a striker Chelsea,do ur job marina!!
We played great but it just didn’t go into the back of the net?

BREAKING: @metpoliceuk confirm a 17-year-old man has been arrested for a “racially aggravated public order offence” at the @Carabao_Cup semifinal between @SpursOfficial and @ChelseaFC at Wembley. #SSN

Tottenham have secured three successive wins against Chelsea across all competitions for the first time since 1961-63.

The tie delicately poised ahead of the second leg. ⚖️ pic.twitter.com/vb210Iu242

#Jorginho poor mans fabregas. Chelsea have best DM on the planet who is playing out of position to accommodate Jorginho who is supposed to be the creative player in the mf? Sarri is bollocks. pic.twitter.com/6ZslGImR56

Chelsea had 17 attempts but I reckon 12 or 13 of those were pot shots from outside the box. I honestly didn’t feel that worried by Chelsea based on the way they were attacking. Only once Giroud came on did I start to squirm a bit #thfc