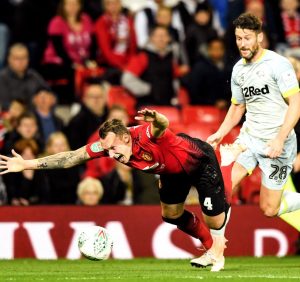 Wait a minute! Frank Lampard’s Derby County have knocked Manchester United out of the EFL Cup 8-7 on penalties after a 2-2 draw. Haha #MourinhoNayo #CarabaoCup #TheScoreKE pic.twitter.com/DpfThfMpK4

OK I have not gone down this rabbit hole in a long time. I said many times here that Jose would never make a Manchester United manager. I took a lot of abuse. I wonder now do is my words sinking in . Today has to have been one of the worst days in United recent history.

Losing to a Championship side is bad enough, but to go out on a whimper and play absolutely shocking football is completely inexcusable. Manchester United are a shadow of its former self.

If you missed seeing Derby County “RAM” Manchester United out of the Carabao Cup. This GIF is a highlight #DerbyvUnited ?? pic.twitter.com/ovuS87WOIn