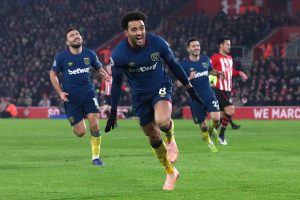 SCOUT: Felipe Anderson was the fourth-most-sold player of Gameweek 19. The West Ham midfielder was transferred out by 166,386 #FPL managers

The Hammers go up to 9th in the table after a Felipe Anderson double turns the match around following an earlier Nathan Redmond goal#SOUWHU pic.twitter.com/MmQ8tfhcqi

Poerhouse. Manuel Pellegrini has created a monster. One of the best teenagers in Europe this season. ? pic.twitter.com/p52S3DjmMX

West Ham have won three consecutive Premier League away matches for the first time since September 2015!

West Ham are up into the top half of the Premier League table after coming from behind to win 2-1 at Southampton pic.twitter.com/IvRDnkgXZG

Felipe Anderson’s double for West Ham leaves Southampton deep in trouble: Southampton supporters arrived in hope of witnessing the third successive Premier League win that would have given them some breathing space in the scrap for survival, but departed… https://t.co/HRqgzMGt9y pic.twitter.com/wAEX6nUoeC

Felipe Anderson scored twice in six minutes as West Ham came from behind to beat Southampton 2-1 at St Mary’s Stadium and move up to ninth in the Premier League table. pic.twitter.com/x1QfDcOXHf