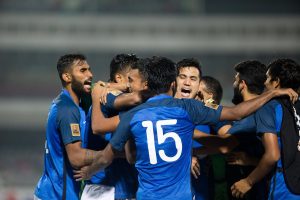 India beat Pakistan 3-1 to frolic into the final of the ongoing South Asian Football Federation (SAFF) Championship at the Bangabandhu National Stadium in Dhaka.

After a goalless first-half, Manvir scored his first foal in the 49th minute, just to double the score-line twenty minutes after his first strike. Substitute Passi fixed the destiny of the match in the 83rd minute by taking the scoreline to 3-0.

For Pakistan, Hassan Bashir found the back of the net in the 88th minute, as Pakistan lost to India by 3-1. On Saturday’s final, India will go up against the Maldives, who easily beat Nepal by 3-0 in the 2nd semi-final.

Why is this trending? What is so great about India beating a lowly 142 ranked FIFA team? If we need to progress in hockey, football or for that matter even as a global power, we need to overcome this obsession with Pakistan. #INDvPAK

Indeed, even in defeat, the Pakistan players gave a decent record of their game, holding a far higher-positioned Indian side to a goalless first half before serious trouble become unavoidable in the second.

India survived a startle in the 39th moment when Pakistan earned an aberrant free-kick at the edge of the 6-yard box, yet Goalkeeper Vishal Kaith returned up with back to back recoveries to deny Pakistan a goal.

Pakistan football lost 3-1 against India in #SaffSuzukiCup2018 this game literally exposed the standards, poor speed poor skills and fitness level is pathetic too. We need more matches against international teams. Good effort to make it to the semis though #INDvPAK

This was also Pakistan’s first appearance in the semi-final following 13 years where they confronted shielding champion India, the main unbeaten side in the opposition up until now.

India were set in Group B close by Sri Lanka and the Maldives while Group A comprised of Nepal, Pakistan, Bangladesh and Bhutan.

The last time the opposite sides met was amid the 2013 SAFF Championship where India beat Pakistan 1-0.

Football: Disappointing Players Of This Season So Far