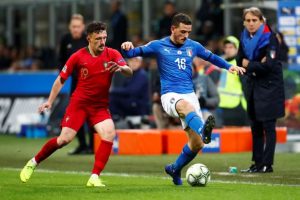 #Italia held to 0-0 draw in Milan tonight by Euro Champs Portugal (minus Ronaldo). Brilliant Italy in first half, but Portugal got back into game in 2nd half when Italy inevitably ran out of puff. Mancini is probably right when he says that his side is still progressing

OFFICIAL: Portugal have become the first team to reach next summer’s UEFA Nations League finals after their goalless draw vs. Italy.#PL pic.twitter.com/oXDP9yveYx