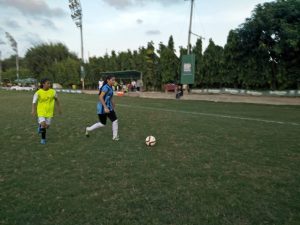 The third quarterfinal of the tournament saw Gilgit/Baltistan Football Academy proving too strong for Balochistan as they outlasted their opponents by 2-0. Anmol Hira of GBFA scored the brace for the winning side in the 37th and 70th minutes of the match.

The fourth quarterfinal was won by Model Town Women Football Club, who thrashed Karachi Kickers by 7-0. Javairia was player of the match as she slammed quartet by converting her goals in the 8th, 15th, 41st and 50th minutes while Rameen Farid was also player to watch as she hit a hat-trick by scoring in the 4th, 16th and 27th minutes.

The first semifinal of the event will be played on 9th August – Thursday, where Islamabad will fight against Punjab at 4:30pm at the Model Town Academy Ground.

On 10th August – Friday, Model Town Football Academy will vie against Gilgit-Baltistan in the second semifinal at The City School ground at 4:30 pm.