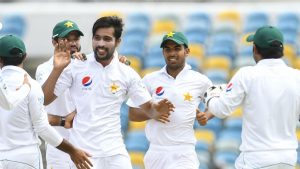 Mohammad Rizwan, who has recently played one Test in Hamilton in November 2016, has additionally been incorporated as the second wicketkeeping alternative behind the Pakistani skipper, Sarfraz Ahmed.

Meanwhile, apart from Hafeez, Pakistan have forgotten the uncapped batsman Saad Ali, pacer Mir Hamza and offspinner Bilal Asif, who were all piece of the squad against New Zealand.

A poor run of restricted overs shape had prompted Amir being dropped from Pakistan’s squad in every one of the 3 formats amid their progressing home season in the UAE.

He did not feature in the Test series against Australia and New Zealand, yet his superb form in first class wicket has allowed him to regain his place in the Pakistan cricket team.

The first test of this 3-match test series will be played on December 26th at Centurion.

When the going gets tough, the tough get going. My sixth sense says @AzharAli_ n @asadshafiq1986 are going to be the stars of SA tour InShaALLAH. Since @babarazam258 plays fast bowling well, he will score 2 100s in the test series IA. Chin up boys! @SarfarazA_54 Nothing to lose!

@OsmanSamiuddin and @mediagag a question for both of you…why cant the chairman of the @TheRealPCB indulges in selection matters to enforce the selection committee to select Fawad Alam for the forth coming South African series..some one who averages 56 with 30 FC hundreds.