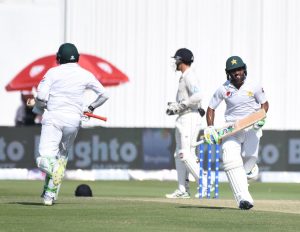 Pakistan managed to score 348 runs in their first innings, courtesy of centuries from Azhar Ali and Asad Shafiq who put Pakistan in control of the 3rd test. In reply, New Zealand lost two early wickets, and are now trailing by 48 runs.

7 wickets in the last session of 3rd day as New Zealand 26/2 still trail by 48 runs.
If New Zealand give 150 plus target then Pakistan team will be in really difficult situation.
Yasir… https://t.co/e3HVleeFEX

Azhar and Shafiq put Pakistan on top: Azhar Ali and Asad Shafiq hit centuries to leave Pakistan in command of the third and final Test against New Zealand in Abu Dhabi despite a batting collapse that curtailed their first-inni.. https://t.co/SsqZaEMaQP pic.twitter.com/3VvWidXTkP

After Pakistan took a 74 run lead in first innings.

New Zealand were reduced to 26-2 at stumps with #KaneWilliamson unbeaten on 14 and nightwatchman Will Somerville on one not out to leave them trailing by 48 runs with eight wickets intact.#PAKvNZ https://t.co/XakPQQ5NYa

Somerville’s debut four-wicket spell helped New Zealand fight back after Ali and Shafiq tons, but two early strikes for Pakistan before stumps has kept them the advantage with two days to go in Abu Dhabi.#PAKvNZ DAY 3 REPORT ➡️ https://t.co/vdtpdBAtgH pic.twitter.com/JQ5kpubEqd