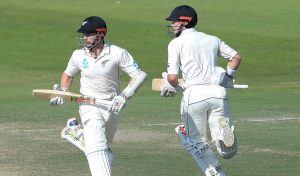 Kane Williamson and Henry Nicholls played an innings of character and put New Zealand in the front seat of the 3rd test. The Kiwis currently lead by 198 runs with 6 wickets in hand.

The day began in high anticipation with New Zealand resuming at 26-2
Pakistan had hopes of an emphatic win once Shaheen Afridi and Ross Taylor caught hooking for 22 with the total at 60-4,
But they were undone by Williamson’s masterclass show that grew confidence in NZ innings,

New Zealand has played according to their plan. Your players spent 90 hours in the field today & that was exactly New Zealand plan. The more tired your players are the better for them. They will score quickly in first hour tmrow & then 70-75 overs to bowl pakistan out

Skipper #KaneWilliamson cracked an unbeaten century as #NewZealand took a valuable 198-run lead against #Pakistan on day four of the third and final test in #AbuDhabi on Thursday.https://t.co/uSUCSROvJa

Nicolls and captain Williamson lead kiwis fight back as New Zealand looks to set a challenging target for Pakistan on day-four of the third and final Abu Dhabi Test. https://t.co/dU8O4maFCC via @Al-Buraaq News

Pakistan can stun new Zealand just like they chased 302 in 57 overs against SL in Sharjah but its difficult here because the boundaries are large in Abu Dhabi but Pakistan is known for Unpredictability Anything can happen …!! #PAKvNZ

I said yesterday that Pakistan could wrap up new Zealand’s batting line in a day. Think I expected too much but honestly we could have finished there batting line up if a review was taken. Oh well. We still have day 5 and we have capable batsmans which can chase 250 easily. https://t.co/VG5JA5pQ6V