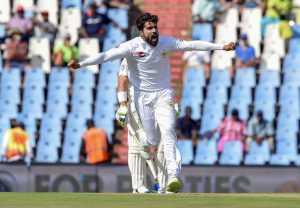 In the wake of being all out for 181, Pakistan battled back, as bowlers commanded on the principal day of the primary Test against South Africa.

Pakistan’s batting line-up was exposed once again, as Duanne Olivier took 6 wickets for 37 runs, by using his surge of forceful, short-pitched deliveries.

South Africa finish the day at 127/5 in response to Pakistan’s 181 all out, they trail by 54 runs. Babar Azam’s 71 and Duanne Olivier’s six-wicket haul the highlights of the day #SAvPAK pic.twitter.com/xPNdvELczM

Pakistan cricket team broke our hope by their batting line we were very hope from batting line but pakteam disoppointed us . Hope they do good bowling ?

Mohammad Amir’s two wickets kept Pakistan in touch on a thrilling first day of the Boxing Day Test against South Africa.@Taha_Wisden wonders if this could finally be the moment he becomes Pakistan’s main man.https://t.co/2d4NI7kIci