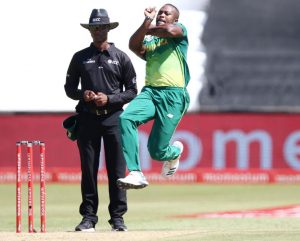 Andile Phehlukwayo performed with both bat and ball and Rassie van der Dussen made a second in a row 50, as South Africa leveled this ODI series by 1-1 against Pakistan.

The visitors had taken Saturday’s opener by five wickets, however, the Proteas hit back by a similar edge at Kingsmead on Tuesday as Phehlukwayo and Van der Dussen mounted an effective pursuit of 204 runs having previously choked up at 80-5.

Phehlukwayo prior took an ODI-best 4-22 as Pakistan were all out for only 203 – a total just supported on account of Hasan Ali’s 59 from 45 balls in a ninth-wicket stand of 90 with Pakistan’s captain Sarfraz Ahmed, commending his 100th appearance in the format.

South Africa’s pursuit was shredded inside 15 overs however Phehlukwayo made his maiden ODI half century, completing 69 not out in a solid partnership worth 127 with Van der Dussen, who followed up his debut 93 at the end of the week with an unbeaten 80 as the hosts made it 1-1 in the five-match series.

Man Of The Match: Mohammad Hafeez

Andile Phehlukwayo scored 69* and also took 4/22 with the ball as South Africa beat Pakistan by 5 wickets to level their 5-match ODI series 1-1 in Durban. #SSCricket

#SAvPAK South Africa leveled the series 1-1 in Durban after beating Pakistan by 5 wickets.

This was mainly thanks to an outstanding and unbeaten 127 run partnership between Rassie vd Dussen and Andile Phehlukwayo – the all-rounder also got 4-22 with the ball. pic.twitter.com/eSF7xtNkTj