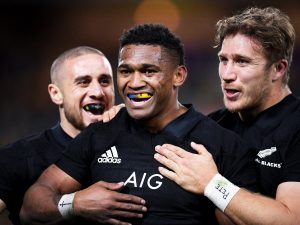 The Wallabies edged a tight first half, but the All Blacks scored before the break through Aaron Smith in Sydney. Jack Goodhue crossed for their second and Beauden Barrett the third as the Wallabies’ set-piece buckled and Brodie Retallick secured a try-bonus point.

Jack Maddocks pulled one back on debut but Waisake Naholo scored a late brace to cap off a clinical first outing. The two sides meet again on Saturday, 25 August at Eden Park, Auckland in round two of the Rugby Championship before the final Bledisloe Cup Test on 27 October in Japan.

The victory was a record 13th consecutive Rugby Championship win for the defending champions.

Credit to the Wallabies, we had to fight really hard and it was a full 80-minute game. They had probably dominated the first half so to get that score [just before half-time] was crucial. The resilience of the boys was awesome.

In the 2017 Rugby Championship opener, Australia trailed 40-6 at half-time as they endured a thrashing in Sydney. One year on, they looked more assured defensively and were set to go into the break with a 6-0 lead.

But two minutes before half-time, returning All Blacks captain Kieran Read found scrum-half Smith to reduce the deficit to just one point and an onslaught of five second-half tries ensued.

Centre Goodhue finished off a length-of-the-field counter-attack, Barrett burst into life with a nice individual effort and Retallick capped off an outstanding performance with a clever dummy.

Australia, who were frustrated by the referee’s calls all afternoon including a possible tip-tackle by Naholo on Folau in the first half, then lost the full-back to a possible ankle injury as Naholo twice dismantled their defence.

The Wallabies claimed a rare victory over the world champions when the two sides met in Brisbane last year in the final Bledisloe Cup match – which was not part of the Rugby Championship – but have still not won back-to-back Tests against New Zealand since 2001.