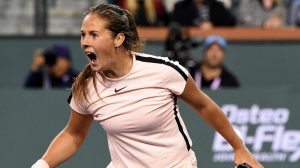 English number one Johanna Konta’s season finished when she lost in the Kremlin Cup semi-finals to Russian 6th seed Daria Kasatkina in Moscow.

Konta was expecting to make her second WTA final of a troublesome season, however lost 6-4 6-3 in Friday’s semi-final.

In the wake of battling for frame and dropping out of the world’s main 40, the 27-year-old has been working with forthcoming new mentor Dimitri Zavialoff in Russia.

Triumphs against Elise Mertens, Daria Gavrilova and Aliaksandra Sasnovich – all above 44th-positioned Konta on the planet, as she hoped to have helped the Briton’s certainty after a baffling season which prompted her part with mentor Michael Joyce a week ago.

Furthermore, there were further positive signs – especially in a tight opening set – for Konta to take, in spite of thrashing by 21-year-old Kasatkina, who is positioned fourteenth on the planet and considered one of the most brilliant wonders on the WTA Tour.

Konta spared 4 set points at 5-2 down in the opener and crushed spirit in the following game for 5-4 – after Kasatkina had spared 3 break points.

Johanna Konta out, but I don’t think it would be unfair to say the experiment with Dimitri Zavialoff has gone somewhat well.

In any case, Konta could not expand on that force. She lost her serve again in the following game, as Kasatkina took the opener having won only one more point than her adversary.

The previous Wimbledon semi-finalist made a urging beginning to the second set by breaking Kasatkina’s serve, just for the Russian to take control and advance 4-1 as Konta’s forceful baseline game started to lose its adequacy.

Good performance from Daria Kasatkina, who defeats Johanna Konta 6-4, 6-3 and makes two Moscow finals in a row. Konta’s game is good on its day, but she offers no room to make changes when she needs a slight adjustment in a match. Kasatkina had way too many tricks for her.

The Briton spared a match point at 5-2 however Kasatkina held serve in the following amusement to achieve the Moscow final for the second progressive year.

Good handshake Jo. Nice run to end the year, top 40 year end ranking and lots to work on for 2019.

Always proud of you @JohannaKonta keep pushing hard in the off season, right behind you ?

UEFA Champions League Recap: 4th Round of Matches held on 21....