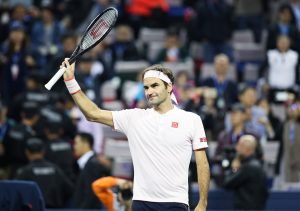 The defending champion and the World No.2 Roger Federer beat Japan’s Kei Nishikori in an amazing and high-quality quarter-final in the Shanghai Masters.

What. A. Match. @rogerfederer battles past an in-form Kei Nishikori 6-4, 7-6(4), reaching his seventh semi-final of the season ?.

How impressed are you with the top seed’s level? pic.twitter.com/2nlZqQCjvU

Roger Federer, going for his first Masters title since winning this same event a year ago, will play Croatia’s nineteenth positioned Borna Coric in Saturday’s semi-finals.

Coric proceeded with the greatest year of his professional tennis career by achieving his second Masters semi-finalwith a 7-5 6-4 triumph over Australia’s Matthew Ebden.

Serbian 2nd seed Djokovic, who could move above Federer into the 2nd spot on the world tennis rankings, beat South Africa’s Kevin Anderson in a rematch of the current year’s Wimbledon final.

Just putting everything aside for a second, can we just acknowledge the fact that this matchup produces such quality ball striking and creative tennis. Of course it’s another matchup with Roger Federer involved.