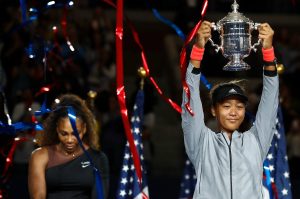 Naomi Osaka won the US Open 2018, after a furious Serena Williams blamed the umpire for being a “cheat”, as the match was filled with emotional scenes from both players.

After a racquet crushing and another code violation, Williams was given a game penalty for her outburst, as Osaka won 6-2 6-4.

Amid all this controversy, the 20-year-old, Osaka maintained her concentration to end up the principal Japanese to win a Grand Slam.

On the other hand, Serena Williams declined to shake hands with umpire Carlos Ramos after the match.

“I just want to tell you guys: She played well and this is her first Grand Slam.”

However, Serena charitably complimented Osaka at the net after the 20th seed finished a phenomenal triumph. And, in spite of the fact that Williams’ conduct will grab attention, nothing ought to bring down a tasteful and formed show from Osaka.

Serena Williams was given three code violations, which resulted in a game penalty, in a 6-2, 6-4 #USOpen final loss to Naomi Osaka—who becomes the first Japanese player to win a Grand Slam singles title. https://t.co/qFu7ILUuER pic.twitter.com/orTzJ7hELT

When you think you’ve seen it all in tennis.. you have not. Truly unfortunate that the umpire got involved far too much. Restraint called for. So a wonderful performance by @Naomi_Osaka_ was partly spoiled. She was wrongly gifted a game, but earned the title. A huge new star.