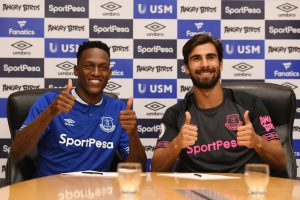 Everton have finally signed the Colombian defender Yerry Mina, for £27.19 million, alongside Andre Gomes on a season-long loan, from the Spanish club, Barcelona.

André Filipe Tavares Gomes is a Portuguese national and a professional footballer. He currently plays for the Portugal national team and Barcelona as a focal midfielder.

Gomes was a vital part of the Portugal squad that won Euro 2016. The midfielder has spent a total of 2 years at Barcelona and played 46 matches in the process.

Mina scored half of Colombia’s goals at the recent World Cup in Russia, and played a major role in taking his team to the last 16 rounds, before Colombia were ousted by England.

Yerry Mina signed a five-year deal at Everton. “It is important that the club want to fight for something.This is why I am here.”

He recently joined Barcelona in January for £10.44 million from the Brazilian side Palmeiras, and played six cup and league matches, as Barcelona were crowned the La Liga champions (2017-18).

Barcelona said they claim all authority to purchase Mina back, while midfielder Gomes, 25, has taken a cost a £2 million loan fee.

Mina’s landing implies Everton have spent more than £60 million in the previous two weeks following the underlying £35 million entry of Brazilian winger Richarlison from Watford, an arrangement that could ascend to £50 million.

Think about that for a minute. Just THINK about that. The sheer destruction Jose has wrought.

So Barça trebled their money on Yerry Mina after seven months and four starts. Pretty good business that.

Kurt Zouma loan deal agreed by Everton, if they can put that to bed along with Yerry Mina, Andre Gomes and Bernard – then that is some last day of the window from The Toffees….