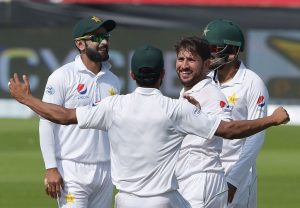 In the 2nd Test, Pakistan defeated New Zealand by an innings and 16 runs, courtesy of Yasir Shah who ensured the second best match figures by a Pakistan bowler.

The experienced leg-spinner, Yasir finished with 14-184, a feat which is now only behind one of Pakistan’s incredible all-rounder and the current Prime Minister of Pakistan, Imran Khan, who had taken 14-116 against Sri Lanka in 1982.

After this win, Pakistan have now successfully levelled the 3-match series by 1-1.

The 3rd and final Test of this series is going to be played at the same venue of the first test i.e. Abu Dhabi.

In the second innings, New Zealand lost their last 5 wickets for 57 runs, with Yasir Shah ending up with 6-143.

Yasir Shah equalled the record of most wickets in a test match by a Pakistani (14 wickets). He equalled it with the current Prime Minister of the country, he plays for, Imran Khan. This is AMAZING #PAKvsNZ

Yasir Shah is now the joint leading wicket taker for Pakistan in a test match joining Imran khan, taking 14 wickets 8 in the first and 6 in the second innings??
Yasir shah you beauty ??
Pakistan did it winning by innings and 16 runs..
Pakistan levelled series by 1-1
#PakvNZ pic.twitter.com/C7uKLDJDWb