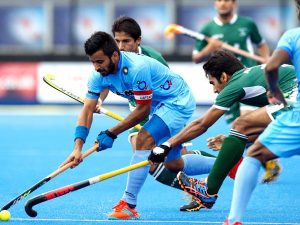 OMAN: India came from behind to beat Pakistan 3-1 at the Fifth Asian Champions Trophy Hockey Tournament at the Sultan Qaboos Sports Complex in Muscat, Oman.

In front of a good crowd, mainly Pakistani and Indian expats, the green shirts started in a stormy fashion. In the very first minute, Pakistan went ahead through a penalty corner. Aleem Bilal’s push was parried by goal keeper Sreejesh’s stretched left leg. But M.Irfan Jr dived on the rebound and pushed the ball in with the stick held in the fully extended left arm.

For the rest of the quarter, India remained in ascendancy. They had a couple of half chances but the equaliser eluded them.

Pakistan again began well in the next quarter. Recalled veteran M. Zubair had all the time at the circle’s top but shot wide. A few minutes later, he again squandered a fine opportunity.

In the 24th minute, Captain Manpreet made it 1-1 with an outstanding individual effort. In a moment of genius, he eliminated three defenders before flicking into the left corner of the tin.

Against the run of play Pakistan earned a PC in the last minute but Mubashar Ali flicked it high.

Two minutes, into the second half, Mandeep Singh put India ahead with the most amazing finish. With his back towards the goal, he somehow pushed the ball between his own legs into the net to leave everyone stunned.

A right side attack initiated from India’s own half culminated in a small square pass to young Dilpreet Singh who easily slotted in from a good spot not far from the goal.

Pakistan’s only chance in the third quarter was a PC which went wasted due to poor stoppage.

The last 15 minutes was also mainly India who could not add to the tally despite having the opportunities.

India were far ahead of Pakistan in statistics: possession, number of circle penetrations and shots on the goal.

After two matches, Pakistan has one win and one loss. And India has two wins.