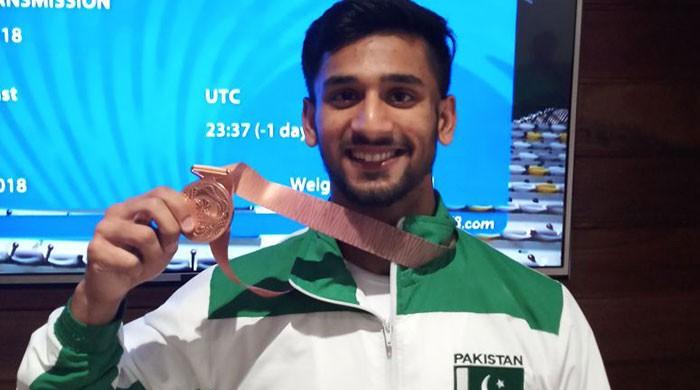 Pakistan started its medal race today when Talha Talib who is only 18 years of age performed a record breaking performance to win bronze for his country in 62 kg weight division.

Talib who is based in the city Gujranwala had won Gold last year in the Commonwealth Games, however, this time he only managed to win a bronze medal.

Nevertheless, he smashed a record when he pulled off a 132 kg snatch and claimed the 3rd position behind Malaysia’s Muhamad Aznil and PNG’s Morea Baru who claimed Gold and Silver respectively.

Talha, lifted a total weight of 283 kg which breaks down to him lifting 127kg in the first, 130kg in the second and 132kg in the third attempt respectively.

Although, the young man had a chance to win Gold after he attempted to lift 151kg in his second attempt of clean and jerk event, however, he couldn’t do so despite his three attempts.

Now, all eyes are set on Pakistan’s Nooh Dastagir Butt who is all set to compete in the +105kg event in the upcoming days.