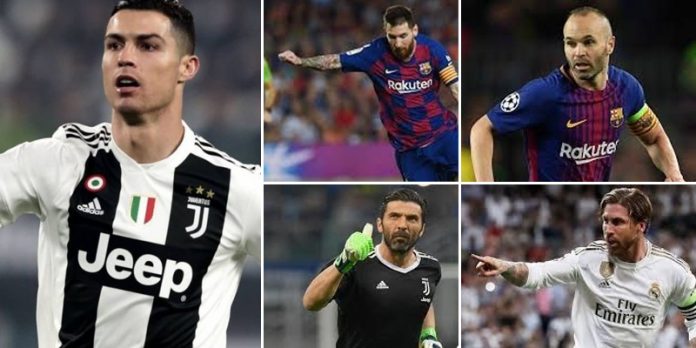 As the decade goes through we have witnessed some uttermost talents in the football world.

The world of football continues to change with new names striking a chord with the fans through their entertaining football. However, there are still many accomplished names that are still relevant today, and at times, unstoppable.

Allsportspk Spotlights the ever green players who are known for maintaining consistency in their respective performance throughout the decade.

Allsportspk Top 5 Players of the decade are:

Messi is a gift to the football world as his skills are phenomenal and his achievements prove that he is one of the only players who defines consistency and loyalty. The facts below explain why is he exceptional and the Allsportspk Spotlight pick.

Having been Barcelona’s all-time top scorer, the Argentinian has always been adulated for his quickness and sharpness as an excellent footballer and has been pinned as a magician by many football fans and pundits from all over the globe.​

Cristiano is one of the greats of the football. He is seen as one of the most consistent players and recognized for the hard work he puts. During the decade Cristiano was absolutely sensational.

There are no significant adjectives in mind when throwing light upon the extremely illustrious life and career of Spanish’s greatest, Andres Iniesta.

Although now retired, but this decade Iniesta was the icon of the midfielders. Iniesta was known for his gamevision passing and accuracy.

Sergio Ramos is considered the direct successor of the legendary defender Paolo Maldini. Being the toughest defender this decade, he is also famous for his 92 minute 48 second equalizer against Atletico Madrid in 2014 UEFA Champions League final which lead to Real Madrid’s well known La decima. Known for his tackling and ball recoveries and also for his attacking skills like shooting and headers. Besides his defensive skills, Sergio has a good goal scoring ratio more than any other defender.

Sergio Ramos is now the captain of Real Madrid and also Spain. Plus he has the record of most appearances for Spain.

There’s no way you can address the best goalkeepers in the world without mentioning the name of Gianluigi Buffon. He is known for his crucial saves!

Buffon is the only​ Goalkeeper ever to:

If statistics​ and records are anything to take into consideration, then Gianluigi Buffon may very well be the greatest modern-day goalkeeper that ever lived.

Buffon at 41, still amazes the world showing that age is just a number and will still play strive this season with Juventus to finally achieve his Champions League dream.