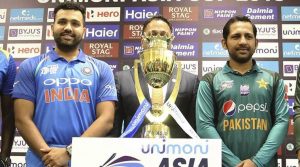 The ever green captain of the Pakistan cricket team, Sarfraz Ahmed said that his side will attempt to perform well in the Asia Cup 2018, which is all set to begin on Saturday.

The 2018 release of the competition will happen in Dubai and Abu Dhabi from September 15- 28 with Pakistan going up against India on September 19. Pakistan’s 16 man cricket squad is at present, in Dubai getting ready for the occasion.

Remarking on Pakistan’s tie with India, Sarfraz said that the matches between the two neighbors have dependably been extremely energizing.

SARFRAZ AHMED:
“Indo-Pak matches have worldwide importance & its being long when they played at UAE. I remember in teen age, watching Indo Pak Sharjah games under immense crowd. This #AsiaCup encounter will be thriller from crowd as many Indians Pakistanis live in UAE”? #cricket

Sarfraz Ahmed and Rohit Sharma are leading their teams Pakistan and India in Asia Cup 2k18,, Both of these players were also representing their teams in ICC U19 WorldCup 2006 in which #Pakistan thrashed India in Final match and won the Title..#AsiaCup2018 #AsiaCup pic.twitter.com/rahZkfXDGG

“We were a young team in last year’s Champions Trophy. Same players have now improved their skills. We’ll play every match of #AsiaCup
considering as our last match. Lets see how we plan to utilize UAE conditions which are different.”? #cricket