This is the first match of of La Liga, Match Day 4 of 38. The highlights are appended below the points table.

Match 1 of 10: Huesca vs Rayo Vallecano 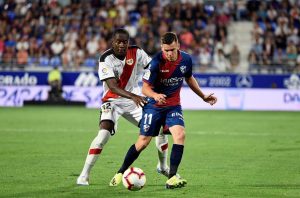 Giannelli Imbula barely put a foot wrong during his Rayo debut. Netted the match-winning goal and looked after the ball with care, linking up well with Gaël Kakuta.

Quite a strange performance from Huesca tonight, would love to know why Cucho and Álex Gallar weren’t included from the off. Their associative attacking play just didn’t flow with regularity.

Tuned into Huesca Rayo late and the Spanish commentators on BeIN Sports were talking about Rory Delap…I’m guessing someone has a long throw-in ?