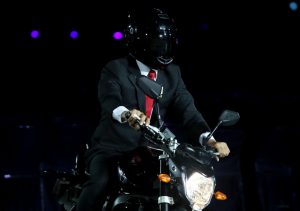 Indonesian President Joko Widodo has made a buzz on social media, after a video appeared at the opening service of the eighteenth Asian Games, which finished with the president, thundering into Jakarta’s primary stadium on a motorbike.

After his motorcade is held up by Jakarta’s famous traffic, the whimsical video demonstrated a formally dressed Widodo bouncing onto a motorbike and evidently jumping snags and exploring back streets after which he enters into the stadium.

The Indonesian President riding in on a bike, thousands of athletes representing 46 participating contingents, hundreds of dancers, artists and firework, the Opening Ceremony of the 18th #AsianGames2018 was no less than a stellar show!

An apparently unruffled Widodo at that point sat down on a 600-ton tropical stage, before opening the Asian Games, at a staggering function including around 4,000 artists.

The trick seemed to draw motivation from London’s 2012 Olympic Games opening service where a video including an appearance execution by Queen Elizabeth, and James Bond on-screen character Daniel Craig seemed to demonstrate the British ruler skydiving into the stadium.

Oh My Godd. “Indonesia” is trending on Korea right now! All because of my beloved president who entered the venue with motorbike. Korean news portals already.made articles about him. Also they praised Indonesian anthem about how the song is so good and it stucks in their head?? pic.twitter.com/R1EPYvuy5q

Indonesian media has conjectured over what parts of the president’s video were really completed by a trick performing artist as opposed to Widodo, a self-admitted bike fan who is regularly portrayed riding motorbikes.

I was so proud with your opening ceremony last night!! the starting with the president entering the venue with the bike and what got me real proud was during the girls’ performance. it was so great I even cried when it ended with the form of Indonesian flag hee