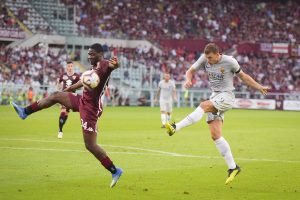 These are the next 5 matches of Match Day 1 of 38, that were held on 20th August 2018. The highlights are appended below the points table. In case, you missed the highlights of the last two matches click here.

Italian Serie A ’18-19 – Highlights: Ronaldo Fails To Score On Debut

* Dzeko’s stunning volley gives Roma last-gasp win: MILAN (Reuters) – AS Roma striker Edin Dzeko scored with a memorable volleyed goal following a mazy run by debutant Justin Kluivert to give his side a 1-0 win at Torino in th.. https://t.co/a877uAV9LR pic.twitter.com/HCU3q1EJei

Recap:
– Promising debut by Kluivert;
– Some good saves by Olsen. Solid debut;
– Pastore was so poor;
– Under and SES disfunctioned;
– Poor finishing and lack creativity

Match 4 of 8: Parma vs Udinese

Parma’s 4 fans must be so happy they are managing to draw 0-0 with Udinese.

Match 5 of 8: Empoli vs Cagliari

Rade Krunic and Francesco Caputo scored for Empoli as they registered a 2-0 win against Cagliari. #EmpoliCagliari pic.twitter.com/V8XsjotLKl

Match 6 of 8: Sassuolo vs Inter Milan

MATCH RESULT: @SassuoloUS 1 – @Inter 0; Well, #Sassuolo may be our bogey team, but this was not in the script – we lost our opening match to lose our enthusiasm. Oh my, oh my…#SassuoloInter #InterisHere #SerieA #SempreInterLIVE #FCIM pic.twitter.com/2AS0dJvw4L

Am telling you that this team (Inter) is deserved to lose.Forget about what they shoud’ve deserved in terms of the penalty shit.This team played so below the standard,especially the lack of creativity from the midfields,very obvious.Seriously couple things need to change, period.

All that hype around Inter Milan building such a strong scudetto contender team… only to lose their opening game 0:1 to little ol’ Sassuolo. To think people were talking down on Napoli for having a weak mercato. #SerieA

Win on the road to start the season for the mighty Spal!

Visit allsportspk later today, for the next matches of Serie A, Match Day 1 of 38.

Allsportspk Snippet: A Goalie Flip Save!