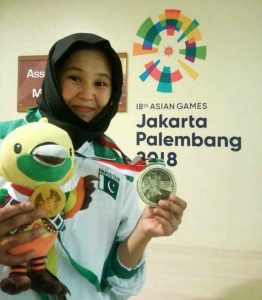 Pakistani Karate player, Nargis won her first medal in the sport, after she managed to beat Nepal’s Rita Karki in the women’s +68 kg Karate competition. This was also the first time that a female Karate player had won a medal at the Asian Games for Pakistan.

Japan’s Ayumi Uekusa won the Gold, while Gao Mengmeng won the silver medal in this category.

This medal was also the second award for Pakistan in Asian Games 2018. As previously, Pakistan Kabaddi team were defeated by South Korea in the semi-finals, which resulted in a bronze medal.

At present, Pakistan is placed is placed at the 30th position in the medal rankings, with no gold medal to its name so far.

This performance by the 19 year old Nargis was very much appreciated on social media.

Congratulations Nargisssssssss ?
Pakistan won their only 2nd medal in the ongoing Asian Games, Jakarta, and this time Karate Maestro from Hazara community, Balochistan has done the job. She secured ? in women’s 68+ Karate category ✌️#ProudHazara #AsianGames2018 pic.twitter.com/6AwzAHBwws