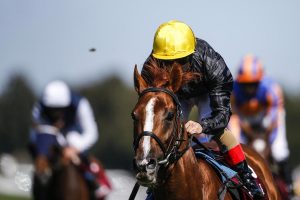 The £1 million prize was reported in January for any ‘staying horse’ that won one of four races in May, including the Yorkshire Cup, trailed by the Gold Cup at Royal Ascot, the Goodwood Cup and the Lonsdale Cup.

The Lonsdale Cup surely should be elevated to G1 level. Top class horses run in this one and one of the legs, in fact the final leg of the £1m Wetherbys Stayers Cup. @yorkracecourse #EborFestival

It is worth mentioning that a horse had never won the four races in a similar season previously.

In May, Stradivarius triumphed in the Yorkshire Cup at York, before guaranteeing the Ascot Gold Cup in June, followed by safeguarding the Goodwood Cup crown in August.

The 4-11 top choice, claimed by Bjorn Nielsen, got the high ground in the last furlong at York to beat his old opponent Count Octave.

Stradivarius (with Frankie Dettori up), parading in front of the stands after winning a cool £1m bonus by landing the Lonsdale Cup at @yorkracecourse this afternoon. I can assure you his victory was no fiddle. pic.twitter.com/JBrPa4yJOz

There was an amazement in the Nunthorpe Stakes as pre-race most loved Battaash completed fourth behind a stunning 40-1 champion, Alpha Delphini.

The 7 year old, ridden by Graham Lee and prepared by Bryan Smart, defeated Mabs Cross in a photo finish.