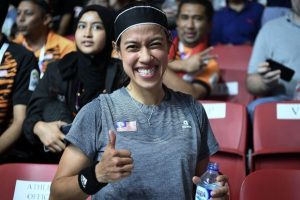 The Squash semi-finals day in the Asian Games 2018 in Indonesia, had Malaysia and Hong Kong China qualify for the gold in Sunday’s finals at the Gelora Bung Karno Sports Complex in Jakarta.

Sivasangari Subramaniam the 19-year-old world No.40, Malaysian continued her maiden appearance form in the Asian Games by yesterday defeating top seed Annie Au in the quarter-finals, and in the semis after a 41 minutes battle succeeding to beat the world No.16 Joshna Chinappa from India.

In the second Women semi-final, the distinguished former world number Nicol David, saw off the Indian Dipika Pallikal Karthik and reached the final for the sixth time in a row.

In the Men’s semi-finals, the Hong Kong players dominated the day and made the final into a all-Hong Kong affair.

In the first semi the existing Hong Kong champion Leo Au, for the second successive time denied Indian No. 1 Saurav Ghosal, a place in the final after fighting back from 2-0 down.

Leo will play the final against Max Lee the second seed who beat Malaysian Nafiizwan Adnan, after fighting back from two games down.

The detailed results were: