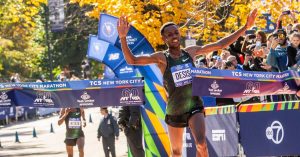 She completed just about four minutes in front of countryman Vivian Cheruiyot, while the USA’s Shalane Flanagan was third.

In stark contrast, in a tight men’s race Lelisa Desisa makes a crucial move past Geoffrey Kamworor to gain an edge at 40km but it’s not over yet ‘as Tola Shura finishes strong behind but Desisa has enough left to hold off for a first marathon win since Boston 2015 in 2h05:59 (SB) pic.twitter.com/9g69maMQWL