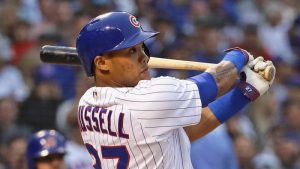 MLB magistrate Rob Manfred made the declaration on Wednesday, with Russell’s boycott retroactive to September 21 and running into the beginning of the 2019 season.

An All-Star and World Series champion, had been on paid regulatory leave while MLB examined charges the 24-year-old verbally and physically assaulted his wife of 3 years Melisa Reidy, previously known as Reidy-Russell; prior to the couple’s divorce in August, this year.

Here is Addison Russell’s statement re his 40 game suspension: “After gaining a full understanding of the situation I have concluded its in the best interest of my family to accept MLB’s proposed resolution of this matter. I wish my ex-wife well and… https://t.co/1s7fFlpJZv

Russell was put on leave in September when a blog entry, accepted to have been composed by Reidy, detailed out the affirmations of maltreatment against the player. He called the assertions “completely false” in an announcement discharged by the MLBPA on the 2012 first-round pick’s behalf.

No criminal accusations have been documented against Russell. Russell discharged an announcement on his choice not to appeal against the suspension.

Did anyone else notice that everything went downhill for the Cubs after the second round of allegations against Addison Russell came out and Maddon/Rizzo didn’t seem to care and pretty much condoned what he was accused of doing? Karma is most definitely real.

The boycott has no playoff implications as ‘The Cubs’ were wiped out from postseason conflict on Tuesday.