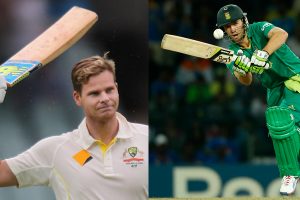 Previous Australia skipper Steve Smith will proceed with his rebound to cricket at the 2019 Pakistan Super League (PSL) rivalry.

The Australian star will certainly be the highlight of the PSL 2019, that is scheduled to be played from February 14 to March 17, next year.

It should be noted that, Steve Smith has not played for his Australia, since the notorious Cape Town Test against South Africa in March. However, the Australian was included in the Sydney Premier Cricket side Sutherland and recently held Canadian Global T20 League.

REVEALED! The PSL 2019 Foreign Platinum Players list. An exciting roster with some of the biggest stars of the T20 format. #PSLPlatinum pic.twitter.com/j9S5iURS6V

At present, the Australian is serving a 1-year boycott in his involvement of a ball tampering, and this is why he cannot come back to playing Big Bash, state and national level cricket until March 29 next year.

The good news for cricket lovers is that, Steve Smith is not the only batting sensation to include in the PSL 2019, as the South African legend, AB de Villiers has also decided to feature in the Pakistan Super League.

Lahore are expected to select AB De Villiers in draft

Both players are named in the highest paying category i.e. Platinum, along with several other notable players like Rashid Khan, Colin Munro, Imran Tahir and others.