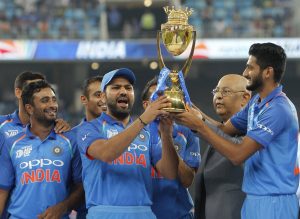 The last over thriller was dominated by India as they overcame Bangladesh to become the Asian champions of 2018.

Congratulations to team India for winning the Asia cup final but must congratulate team Bangladesh also for putting up a great fight ..
Tonight cricket won ..

MS Dhoni is without doubt, one of India’s greatest ODI players. But if he’s not going to win you a chase of 223 now, then respectfully, it’s time to at least start looking at alternate options. Pant perhaps? #AsiaCup #IndvBan

Congratulations to Indian Team on winning the Asia Cup for the Seventh Time….just now get up and came to know…so India won on the very last ball Dhoni and Karthik partnership was crucial and Bhuvi played good innings in the end #INDvBAN #AsiaCupfinal

@BCBtigers beat the match
But fought with full emotions.
Liton Das, who played in the Asia Cup final 2018
These innings will be remembered for a long time.
very impressive
Well played #Bangladesh Tigers ?
outstanding efforts

Yet another Heart break for Bangladesh & their Fans !

India is breaking their hearts time & again In major tournaments!!

Truly they deserve to be the Winners yesterday , Still Luck favoured India 🙂

Happy that we won The Asia Cup,But sad to see their heart breaks.#INDvBAN

#AsiaCup2018 Congrats team India for Winning Asia Cup without loosing a game but we are struggling when top 3 bats man does score big . Afganistan & Bangladesh Match is the example…World cup round the corner need introspection @imVkohli @RaviShastriOfc

Congratulations! INDIAN CRICKET TEAM to Winning the #AsiaCup2018 .This #AsiaCup champion of all player’s of many many greetings. The 34th year’s to very romance final match. Indian to win by 3 wickets &v223*/07. #CongratulationsTeamIndia ????
एकता में ताकत!???आगे बढ़ते रहो pic.twitter.com/GGdqoRJ0x8