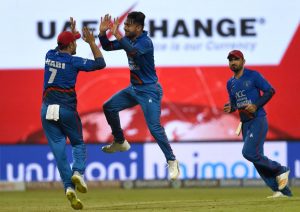 After putting a stunning performance with the bat, Afghan bowlers ripped through Bangladesh’s batsmen, as Afghanistan won the match by 136 runs.

That is an absolute thumping, and an exquisite team bowling performance, with six bowlers taking a wicket and no one claiming more than two.#BANvAFG SCORE ➡️ https://t.co/lrwXpuwMMb#AsiaCup2018 pic.twitter.com/qEe7Xqbb6Y

what a victory such a proud moment for #Afghanistan ,our Blue tigers the Afghan National cricket team once again bring smile on face of afghan people by historic huge win over Sri Lanka . Congratulations? pic.twitter.com/bNvCs7UwrU

Incredible to see the progress the #Afghanistan cricket team is continuing to make in the #AsiaCup18. Our relations may be complex, but I speak for many Pakistanis when I say we feel exceptionally happy when our Pashtun and Afghan brothers do well.
زه تاسو ته ډېر مبارک ویم pic.twitter.com/U7Wtt5zOVD