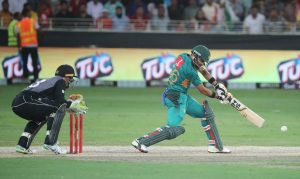 Shaheen Shah Afridi took 3/20 to restrict New Zealand to 153/7 in 20 overs. This was followed by an equally good performance with the bat, as Pakistan chased down the score with 2 balls to spare.

Brilliant performance by an outstanding Pakistan team! Well bowled Shaheen afridi, great series for @MHafeez22. Newzeland will badly missed guptil and boult. But 2-0 win against New Zealand is special every way. Pakistan will now to looking for another clean sweep
????? #PAKvNZ pic.twitter.com/3pAPJvFBeS

The Professor seals the deal!

Cool as a cucumber, Mohammad Hafeez strikes 34 off 21 to secure the series with six wickets and two balls to spare!