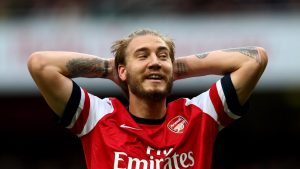 Ex-Arsenal striker Nicklas Bendtner has been condemned to 50 days in prison in Denmark after an assault on a cab driver.

The 30-year-old Rosenborg player has appealed his case, and has been discharged until a consultation at a higher court.

The episode occurred in September, with the City Court of Copenhagen indicated CCTV film in which it showed up Bendtner striking the driver in the face.

Former @Arsenal striker Nicklas Bendtner has been sentenced to 50 days in jail for assaulting a taxi driver, the City Court of Copenhagen said on Friday.

Bendtner said the driver tossed a container or a can towards him and his better half when they exited without paying.

Former Arsenal forward Nicklas Bendtner has been sentenced to 50 days in jail after being convicted of assaulting a taxi… – https://t.co/Ih5AwK5mwA pic.twitter.com/PeZTgZ7fsL

He played on loan at Sunderland, Birmingham City and Juventus while at Arsenal before making a lasting move to German club Wolfsburg.

He moved back to England to join Championship side Nottingham Forest in September 2016 preceding joining Rosenborg in March 2017.

Nicklas Bendtner has been sentenced to 50 days in prison for breaking the jaw of a taxi driver after an altercation. Dropped by Danish NT too I believe.