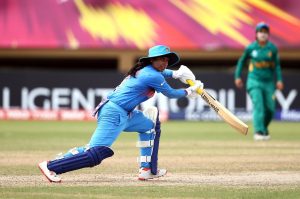 Pakistan were restricted to an average total of 133/7 in 20 overs, courtesy of some economical bowling by India women. This was followed by an equally dominant display of batting in which Mithali Raj scored a fifty to take India women to victory.

Clinical win for Indian Women’s team over Pakistan.
Top effort from Mithali Raj who used her experience to guide India home. Good to see the management innovating. Covered the team’s preparatory camp and the team is determined to win the title@BCCIWomen #INDvPAK #INDWvPAKW

An another feather to Indian women cricket crown. Easy win against PAK, they have chased down the target of 134 runs with the help of @M_Raj03 ‘s 56(47)runs which also includes 7 fours. Congratulations team India and many more congradulations to dear Mithali #INDvPAK #WT20 pic.twitter.com/G2xCepi2Ja

A double whammy for Indian cricket in T20. Congratulations to Team India Men’s & Women’s Cricket for a spectacular victory. Series win for the boys. Kudos to @ImRo45 and @M_Raj03 & #harmanjeetkaur #INDvPAK

India make it two wins out of two at @WorldT20! ??@M_Raj03 starred with 56 as Pakistan’s 133/7 was chased with an over remaining – India win by seven wickets.#INDvPAK scorecard ➡️ https://t.co/5QqAmBazMO pic.twitter.com/cbbTCgzXxM