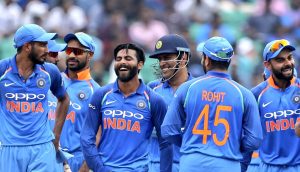 India whipped West Indies by nine wickets, after an exceptional bowling performance, in which West Indies were all out for 104, to finish a 3-1 ODI series triumph.

The visitors were expelled in 31.5 overs at Thiruvananthapuram, skipper Jason Holder top-scoring with 25.

Rohit Sharma made an unbeaten 63 and the Indian team captain, Virat Kohli hit 33 as India pursued down this minimal target in 14.5 overs.

It was the West Indies’ least aggregate in a one-day worldwide against India, and their tenth most minimal against any nation.

West Indies were bowled out for 104 in 31.5 overs by India. Ravindra Jadeja picked up 4 wickets & every Indian bowler did his job to perfection with first Kumar & Bumrah getting a early breakthrough, Khaleel did a good job & then the spinners throttling the West Indies batting.

Dhoni has been dropped for the upcoming T20 series against the West Indies and Australia and there is a possibility that he never plays for India again in the shortest format#ViratKohli #MSDhoni #TeamIndia #INDvWI https://t.co/zuJCt3AKvw

As India beat West Indies by 9 wickets,just wondering:
Does it make sense if you wish to retain MS Dhoni for World Cup but want to try other Keepers for T20s when
-He won’t get too many games before world cup now?
-If your vital cog in wheel is out of form,why not give him games?