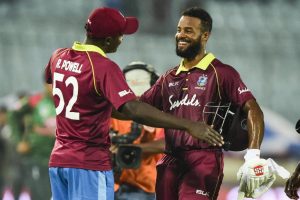 The Windies had lost every one of the three matches against Bangladesh preceding Tuesday’s second 50-over match, however they at long last anchored a triumph as Hope guided them home by four wickets in Mirpur.

Requiring 256 to win, Hope hoped to have put the Windies in spitting distance of the win with his third ODI century, however a late wobble saw them requiring 32 off the last three overs.

Expectation was not to be denied his job as a matchwinner, however, as he shot 14 off the penultimate arrangement of six to give him a career-best 146 not out and West Indies a truly necessary triumph.

The loss of Chandrapaul Hemraj for three could have started an early batting breakdown yet dissimilar to in past matches, the Windies ventured up to the plate, with Hope the way to their win.

His shocking century came at a little more than a run a ball and included 12 fours and three sixes, securing the innings all the way.

Well Played Shai Hope
Kept the Hope for WIndies
A round of applause ??#BANvWIN — watching Bangladesh vs West Indies

Shai Hope has single-handedly propelled Windies to a victory, levelling the series 1-1. In a chase of 256, Hope scored 146*. The next highest score was 27. What a player! #BANvWI

Shai hit an unbeaten 146 and was named Player of the Match: https://t.co/uohnUASiD2#bedes #oldbedes #alumni #cricket pic.twitter.com/UzatvB3Sgb