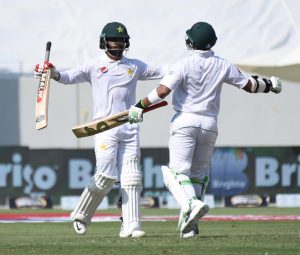 Mohammad Hafeez denoted his arrival to Test cricket with a century as Pakistan achieved 255/3 at stumps on the main day of the opening test against Australia.

Veteran all-rounder Hafeez disappointed Australia in transit to his tenth century before being caught before the wicket for 126 by pace bowler Peter Siddle in the last session.

A partnership of 205 runs was shared with Imam-ul-Haq, who was significantly more forceful in his thumping score of 76 runs.

Pakistan are still looking good for a big score with lot of batting still to come. Australia will be hunting for quick wickets on the morrow. Pakistan will be aiming at getting 400 or more runs to play it safe. This will also give the Pakistan spinners a good handle on Australia.

Best Opening Partnership vs ?? is 249 by Abdul Kadir & Khalid Ibadulla at Karachi in 1964.

Lot of people asked if it is first time both captains (Sarfraz and Paine) are also keepers in a Test. It is actually 8th time but first time involving Australia or Pakistan. #PakvAus

Highest opening partnerships for Pakistan versus Australia in Test cricket:

Australia fought back in the final session but Pakistan had the best of the opening day in Dubai thanks to a century from @MHafeez22 on his Test comeback.#PAKvAUS REPORT ?https://t.co/CIbxsd4Zlb pic.twitter.com/mklW9IdcAB