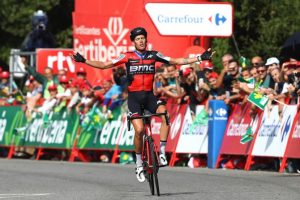 Alessandro De Marchi won the longest phase of the current year’s Vuelta a Espana as the moving Galicia slopes started a hard day of racing.

Thibaut Pinot came near to acquire the general race lead from Simon Yates only to race far away and pass up a great opportunity on the stage 11 victory.

8 years ago, a certain Alessandro De Marchi finished 3rd in the stage of Turul României to Vatra Dornei. Today, he won for the 3rd time a stage in La Vuelta a Espana. We’re proud that such a champion honoured our race in the past. Complimenti, Alessandro ! ???#TurulRomaniei pic.twitter.com/QHWlv1qVVx

De Marchi has won only four races in his nine-year vocation so far. And, surprisingly three have come at the Vuelta an Espana, where he frequently gets the flexibility to utilize his quality as a domestique to chase for individual achievement.

The breakaway makes it in Luintra after a crazy, fast stage. One of the masters in this discipline, Alessandro De Marchi gets his 3rd stage win in La Vuelta, chapeau to BMC for the perfect teamwork today! And to Pinot for going for it. ??#LaVuelta18 pic.twitter.com/3e5Aq9NPdg