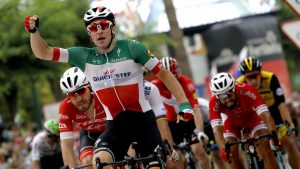 Elia Viviani won his first triumph at the Vuelta an Espana, beating Giacomo Nizzolo to win in Alhaurin de la Torre on stage 3. Peter Sagan completed behind the Italian pair to take the third place.

Michal Kwiatkowski completed in the bundle of cyclists to keep his red jersey and keep up his 14-second lead over Alejandro Valverde with whatever is left of the top 10 continuing as before.

Following a troublesome day, it was a chaotic finale with not one group ready to take control of the peloton in the last kilometers. Various sprinters attempted to run long with Marc Sarreau propelling a move under the flamme rouge. Sarreau was brought back before Danny van Poppel had a go.

Guided in by Michael Morkov, Viviani stuck around for his chance and crushed through a line of sprinters to get to the front with just shy of 200 meters remaining.

Elia Viviani collects his 16th UCI (road) race win in 2018, which is at least four more than any other rider this calendar year. #vuelta

The best sprinter of the 2018 season, Viviani looked untouchable once he got up to speed, with just Nizzolo ready to go anyplace near him. Following four wins at the current year’s Giro d’Italia, this is Viviani’s fifth Grand Tour achievement this season and his first at the Spanish race.

.@Kwiato finishes safely near the front of the peloton to keep the overall lead at #LaVuelta18 as a well-timed sprint from @eliaviviani (QST) sees him win the stage. Great work from the team to navigate a tricky finale! ? pic.twitter.com/g7cbH7zkyV