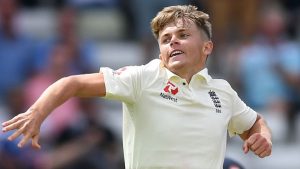 England and Wales Cricket Board (ECB) has awarded the Surrey all-rounder, Sam Curran with his first central contract.

Having made his Test debut in June against Pakistan, the 20-year-old continued his consistent performances and was named player of the series against India. This was a result of his 272 runs and 11 wickets which enable England to win the home series by 4-1.

Not entirely sure about Sam Curran getting a central contract. Seems premature. There’s a chance his bowling looks innocuous abroad. Love his batting, and love him as a prospect, but should Roland Jones have got a central contract at the end of last summer? Not for me

Sam Curran’s more established sibling Tom Curran has been given an incremental contract for the upcoming 12 months.

Also, England’s former captain and opening batsman, Alastair Cook is not seen in the rundown, following his retirement from the sport, while pacers Toby Roland-Jones and Jake Ball have been revoked of their central contracts.

Sam Curran has been awarded a Test central contract as reward for his international breakthrough; England will now have the say on his workload.#SamCurran

There is a vicious circle of finance developed. England players on £1million contracts, county players on £100k + contracts; large coaching & admin staffs. Unsustainable without TV money and t20 crowds. Agenda driven by money not the game. No one wants a pay cut do they.

2018/19 Test contracts (till Oct 2019) for everyone who played at The Oval minus Keaton Jennings. 13 ODI contracts. No great surprises. Tom Curran on an incremental