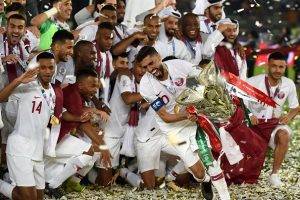 The 2019 Asian Cup final certainly lived up to expectations ???

See all the goals ? pic.twitter.com/PsxNR96trC

Wow! Had no idea Qatar won the Asian cup. What an achievement! Akram Afif assisted two and scored the third in the final. Had three assists against UAE in the SFs as well. Unbelievable contributions! #asiancup2019.

Xavi correctly predicted 7/8 quarter finalists, 3/4 semifinalists and both the finalists of the AFC Asian Cup 2019. He predicted a tournament win for Qatar. The final is currently on-going with Qatar leading 2-0. pic.twitter.com/bGumkhb2Rq