Golf – Saudi International: World No.3 Dustin Johnson In The Lead 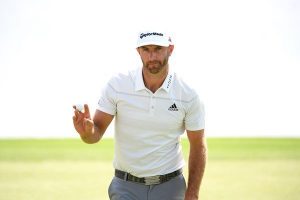 Dustin Johnson rushed into a three-shot lead at the Saudi International following a motivated 61 on day two at the Royal Greens Golf and Country Club.

The world number three checked another course record on Friday as he exploited more settled conditions to come in seven birdies and a falcon on his approach to 11 under.

Johnson – beginning the back nine – started his accuse of consecutive gains previously including two more by the turn, anyway he was all the while trailing Zander Lombard by three.

As the birdies evaporated for Lombard, Johnson turned on the style, grabbing another five shots on his route home to move clear of the pursuing pack.

Lombard completed with a decent 67 – his round ruined by intruder at the ninth and twelfth – to give him an offer of second place with Li Haotong, who seems to have rapidly put his questionable discipline at the Dubai Desert Classic behind him.

The pair sit at eight under, with Fabrizio Zanotti and Scott Hend a further shot back after rounds of 66 and 63 individually.

Overnight pioneer Thomas Pieters persevered through a hopeless day as he dropped out of dispute, the Belgian marking for a four-more than 74 to abandon him in a tie for eighteenth on three under.

This is the 17th time @DJohnsonPGA has led/co-led after 36 holes in his career.

He has converted 8 of the previous 16 events into victories.#SaudiIntlGolf pic.twitter.com/zs5GGHqiyf