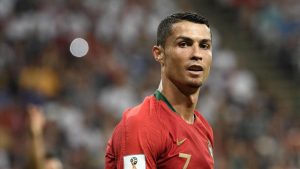 The Juventus winger and arguably one of the best footballers on the planet, Cristiano Ronaldo will not feature in Portugal’s international matches this month.

Previously, the Juventus star was rested from the Portugal squad for the international matches in September. The Portuguese team’s manager Santos explained the reason behind Ronaldo’s non-inclusion which was that the player required time to adjust to his transfer to Juventus from Real Madrid.

So while Portugal leaves Cristiano Ronaldo off the national team and Nike calls the rape allegations against him “disturbing,” Juventus responds by… backing their 80 million Euro investment unequivocally. pic.twitter.com/MHS2eNwUbQ

However, in October, Ronaldo’s non-inclusion might be due to an alleged rape allegation, made by Kathryn Mayorga. Cristiano Ronaldo has blatantly denied the accusation and has stated that he has a clear conscience.

Real Madrid lost their top scorer, Cristiano Ronaldo, as the 5-time Ballon d’Or victor made his way to to the Italian club, Juventus for a whopping transfer fee of £99.2 million.

MaisFutebol claim Cristiano Ronaldo ruled himself out of playing for Portugal again in 2018 as he considers himself to be in a “particular and one-off situation”.

Ronaldo made it clear he’d never abandon the Portuguese national team and that he expects to return in the future. pic.twitter.com/KGokyMdxC2

At present, Ronaldo has scored a total of 85 goals in 154 matches for Portugal, and is their highest goal scorer of all time.

Portugal have a match scheduled against Poland in the ongoing UEFA Nations League on 11th October, and after that, Portugal will play a friendly match against Scotland.