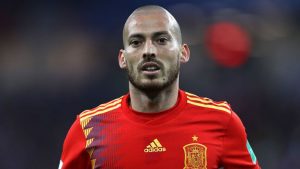 The Spanish midfielder, David Silva has reported his retirement, two days after his fellow team mate, Gerard Pique announced the end of his international career with the Spanish team.

This day should be known as David Silva day. What a player – the best to ever don the @ManCity shirt in my opinion. #ManCity #DavidSilva @21LVA

David Josué Jiménez Silva is a Spanish national and a professional footballer. At present, he represents the English Premier League club, Manchester City, where his main position is that of an attacking midfielder, however he also possesses the ability to play as a winger.

On his decision to retire from International Football, Silva said the following words:

It has not been easy, after all I’ve experienced, to write these lines. I’ve spent days and weeks considering this. The national team gave me everything and helped me grow as a player and a person. I leave proud and happy, bringing an end to a time full of emotions and memories, like of the figure of Luis Aragones, a maestro who will never be forgotten.

Silva made his debut for Spain in 2006, and since then he took part in over 125 matches, before finally deciding to retire from international football. The 32 year old played a vital role in helping Spain to win the 2010 World Cup and the European Championship titles in 2008 and 2012 respectively.

World Cup 2010 and Euro 2008 & 2012 winner David Silva has announced his retirement from international football with Spain. He made 125 caps, scoring 35 goals. pic.twitter.com/yW5gEG7NPH

The Spain midfielder has retired from international football ? https://t.co/X3Vq9dLuZc pic.twitter.com/F010ECDow0

David Silva announces his bye to spanish national team. He gave a lot of incredible things to the team and now he will be focus in Manchester City.

I’m actually a little emotional about @21LVA retiring from international football as it reiterates the fact that he will one day retire fully and never play for Man City ever again.

I knew it would come, but still, this moment has come sooner than I had expected. One of the best midfielders of our time, I wish you have taken away as much joy and excitement as you have brought to the fans, and enjoy the rest of your career at Man City to the utter most. ❤️