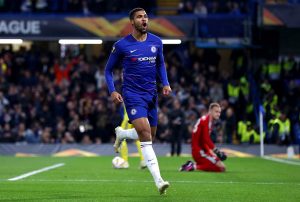 Ruben Loftus-Cheek sets Stamford Bridge alight, giving a huge boost for Chelsea’s academy: https://t.co/co0uL2t1jB My piece on the power of his performance, as he carries the pressure to make the breakthrough #CFC #UEL #CFCvBATE

Last season I didn’t know what our best midfield was because Bakayoko and Drinkwater were so average.

Now I still don’t know what our best midfield because they’re all so damn good. pic.twitter.com/DRHtrTDptM

1 – Ruben Loftus-Cheek’s goal versus BATE Borisov came with his first shot on target for Chelsea in 2018-19 (in his fourth appearance). Opener. pic.twitter.com/op138Pcnir

The Chelsea starlet was handed a rare start in the Europa League clash against BATE Borisov at Stamford Bridge on Thursday and wasted no time in proving a point… pic.twitter.com/u86LqWDZww

Rueben Loftus Cheek hits a hat trick for #Chelsea as they beat BATE Borisov 3-1 at Stamford Bridge. Did this performance earn him a starting place at Chelsea, and his cemented place in the senior national team? #LoftusCheek #CHEBAT #BATE #England

Kovacic hasnt impressed, RLC basically did what he does all the time but scored lol, BATE were complete garbage though barely did a thing https://t.co/crCiZEjyjm

Nicolas Anelka to visit Pakistan this summer along with other stars