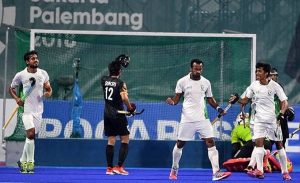 As Pakistan ended second in the round robin behind India, after beating Malaysia, due which they fell into the third slot on goal difference. Thus, they will play against each other again in the semifinal on Saturday – 26th October.

While in the second semi-final India will face Japan.

It was these two teams’ last match of the round robin phase at the Hero Asian Champions Trophy Hockey Tournament at the Sultan Qaboos Sports Complex in Muscat, Oman. Both Pakistan and Malaysia had already qualified for the semifinals, and also virtually assured to face each other again in the last four stage.

Still, there was more than the bragging rights attached to this tie. What added spice to this match was the fact that Malaysia’s head coach, Dutchman Roelant Oltmans, was in charge of Pakistan team till one month back. Under Oltmans tutelage, Pakistan had defeated Malaysia 4-1 when the two sides last met, in the Asian Games two months back.

Nothing much to describe the first 30 minutes. There were some soft circle entries at either end. The only shot at the goal came via an Imran Butt blunder. Pakistani net minder’s ridiculous clearance went to an opponent at the top of the circle. The Malaysian forward, who had all the time in the world, made a hash of it, shooting straight at Imran Butt. Neither side had a penalty corner.

Things livened up in the second half. The tempo was faster and both the teams had some good chances but fine show by the two custodians and poor shooting meant it was still goal less after three quarters. Pakistan earned the first PC of the evening in the 46th minute. Aleem Bilal’s hard angular push was padded away by the goal keeper with an extended right leg.

Pakistan who had a bit more of the play finally managed to break the ice in the 53rd minute.After electrifying passes on a counter attack, M.Irfan Jr standing close to the goal expertly put it in. Two minutes later, a strong Ajaz Ahmad top of the circle shot was well taken by the well positioned Malaysian shot stopper on his chest.