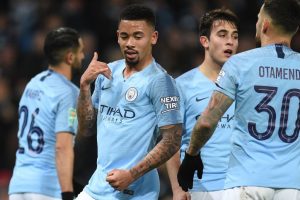 Manchester City fall short of equalling the record for a League Cup match.

Surely @ManCity’s 9-0 victory has to be the biggest win in a single game in a semifinal in a major cup competition ever? @OptaJoe?

We are aware of the traffic issues causing delays for @burtonalbionfc fans heading to @ManCity
We are liaising with Club and Match Officials over the kick off at this time it remains a 7.45pm kick off. However should further delays occur this will be reviewed @BrewersTV #BAFC

De Bruyne nods in from close range. Manchester City might score more goals than than there are spectators tonight.